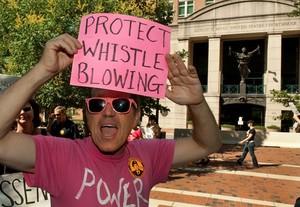 Sometimes just the title of the case tells me that I have to write about it.  So it goes with Whistleblower 14106-10W, 137 T.C. No. 15.  The IRS has had programs to pay informants for a long time.  In 2006, though, Congress gave them orders to step up their act and establish a whistleblower office.  They also gave whistleblowers the right to appeal IRS award determinations to Tax Court.  These things take time so it is only this year, that we are seeing the effects.  Here is Eric Young talking about the first major award under the mandatory program:

The IRS has been taking some grief from Congress for not taking whistleblowers seriously enough as my guest poster Patrick Carmody noted in his September piece on the subject.  That was what Mr. 14 (as I will call him – although it might be her) was complaining about.  That complaint went nowhere, which would have made for a pretty short decision rather than a lengthy one which the Tax Court qualified as one of its regular decisions, which are much less common than memorandum and summary decisions.  The Court was ruling on Mr. 14′s motion to have the record sealed or at least allow him to be anonymous.  The IRS was looking for summary judgement on the claim.  That was the easy part:

Respondent asserts that he is entitled to summary judgment because petitioner does not meet the threshold requirements for an award under section 7623(b). Along with his motion for summary judgment respondent filed the affidavit of Chief Counsel Attorney David A. Ingold, declaring, on the basis of his review of respondent’s administrative and legal files and on the basis of conversations with relevant IRS personnel, that the information petitioner provided resulted in respondent’s taking no administrative or judicial action against X or collecting from X any amounts of tax, interest, or penalty.

As this Court stated, under section 7623(b)(1) “a whistleblower award is dependent upon both the initiation of an administrative or judicial action and collection of tax proceeds.”  “If the Secretary does not proceed, there can be no whistleblower award.”  According to the affidavit filed in support of respondent’s motion for summary judgment, these preconditions for an award have not been met. Consequently, we shall grant respondent’s motion for summary judgment.

Mr. 14 had tried to argue that the summary judgement could not be made while the motion for anonymity was pending, but he did not otherwise oppose the motion.  If the Service chooses not to act on the information, there is really nothing the whistleblower can do.  They still had to decided about anonymity, though.  Mr. 14 no longer worked for Company X, which he had been trying to rat on, but there were still concerns:

The IRS argument was interesting.  When he was just going hat in hand to them with the information that they snubbed they were fine with him being anonymous.  If he is going to appeal, though all bets are off.  The Court went with Mr. 14:

Respondent [IRS] suggests that by pursuing judicial review, petitioner has chosen to relinquish the confidentiality accorded by the Whistleblower Office. Respondent’s take-it-or-leave-it approach to confidentiality improperly minimizes the practical value of judicial review, which is an integral part of the scheme under section 7623(b). Respondent’s approach, which we cannot say is disinterested, would confront claimants with a dilemma of either forfeiting confidentiality to seek judicial review or forfeiting judicial review. The likely upshot would be a chilling effect on some claimants who have a compelling need to proceed anonymously. This result would be at odds with the ostensible legislative purpose of encouraging tax whistleblower claims and promoting public confidence, through judicial oversight, in the administration of the tax whistleblower award program.

In order to further protect anonymity, Mr. 14′s counsel was also not part of the record, which is really unfortunate.  I think the strategy in this case might have been more to get a strong boost to the anonymity principle rather to actually win, since there did not seem any underlying merit.  I really wish this whole thing would just go away as I have a hard time thinking about what tax practice is going to be like if it really takes off.  There will be strong incentive to keep anybody who is not under ethical constraints out of the loop in any discussion of significant tax issues.